The Celtic Tenors signed to Decca/Universal Australia in 2015. Legendary producer Charles Fisher was given the job to produce the album, much of it at JAM Studios. We talked to him about the journey.

Q. Charles this was your first time in Ireland even though you’re married to an Irish Australian! What are your impressions of the country and the people?

A. The people were very friendly and fiercely nationalistic. It felt like a community more so than most places I have been. Gorgeous countryside especially where I was in Kells and unfortunately I didn't get a chance to go very far afield. Dublin is a beautiful city, very vibrant and and full of great cafes and restaurants. A very European and historic city!

Q. What was the preparation for the album before you got to Ireland? What was the strategy behind song choice?

A. My brief from Universal was to do a classical-crossover album. They wanted contemporary songs with more of a pop flavour. I tried to pick songs that would suit the band's demographic and perhaps even have a hint of Irish lilt in them as well as be accessible to radio. As we agreed on songs I asked the boys to do very basic demos. They did their own vocal arrangements and then sent me simple vocal and guitar demos, and based on these we narrowed the song choices down to the ones that appear on the record. For a couple of the songs, e.g. Calypso, I did arrangement sketches in Australia before meeting up in Ireland, but for the most part I just had an idea in my head that we fleshed out once we got together in Jam studios.

Q. You hadn’t worked in Ireland before and didn't really have any professionals on the ground that you knew were up to the job. Did that make you nervous? How did it work out?

A. I was admittedly nervous going into such a situation, studio unknown, engineer unknown and musicians unknown. I chatted with Martin a couple of times on Skype and got a good feeling about him from those conversations. Also I had listened to some of Martin's past work and knew that I was going to be working with a very accomplished and tasteful musician. I relied on Martin to suggest the other musicians and the choices he made were beyond my expectations, plus Martin's own multi instrumental abilities and his musical knowledge had a profound effect on the way I envisaged recording the album. He ended up playing guitar, bass and some keys as well as engineering and Andrew Quinn was as fine a drummer as I have ever experienced. It was a fabulous project and I left Ireland with a strong desire to return and do more work.

Q. Having been exposed to the best studios in the world, how was your experience working at JAM Studios as a working environment and equipment quality?

A. Jam had an extremely clean and professional recording chain. It was very simple, mikes straight into some hi quality pre's and straight into the DAW. I bought a couple of mics with me as well so equipment wise we were well covered. The studio itself was very comfortable and the acoustics very well treated, whilst it was not a big room it did give us a very tight and professional sound, In fact the size of the space created just the right intimacy for this project.

Q. The album was approached in a very organic rock n roll way, recording the rhythm section from the ground up before orchestral arrangements. You prefer it this way?

A. My background is more about head arrangements than pre-conceived arrangements. I knew the feel I wanted for the songs and knew how to convey them, but I wanted to allow the players space to contribute their own ideas and styles especially when working with people as talented as Andrew and Martin. I wanted the record to lean more towards pop than classical so I wanted the rhythm section to dictate the orchestrations rather than the other way round. 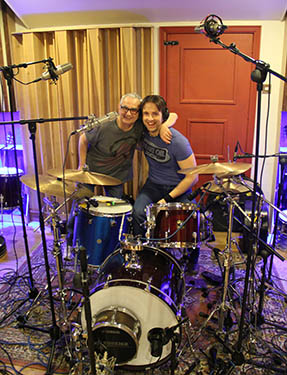 Q. Drums were the first thing recorded against a fairly blank canvas. For this, you used Andrew Quinn, in-house session drummer at JAM Studios. How was the process for you? How long did drum sounds and takes take?

A. I thoroughly enjoyed the drum recording. I think it took us only a couple of days to do all the songs. This was a result of Martin knowing Andrews sound from past work, so the sounds came together very quickly, as well as the fact that Andrew is an amazing drummer both technically and creatively. Once I had conveyed the feeling I was after for each song, I don't think it took more that a take or two for Andrew to nail the part. Amazing really. He has such great feel.

Q. The piano was recorded by Daryl from the Tenors. Did that make the performances a little more personal than hiring a session player? 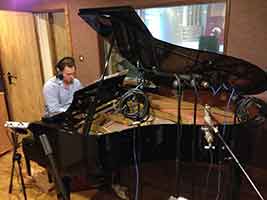 A. The answer to this is yes. Daryl had a vested interest in the performances and definitely gave it a more organic and less predictable feel. He was also of course very aware of the groups singing style and the piano parts melded into the tracks as if they were recording live.

Q. What’s that rhythm sound on ‘The Boxer’?

A. I wanted a rhythm that was fairly street, percussive rather than traditional. Andrew came up with this rhythm based on a bodhran and a cajon. It gave us a really nice lilt to which we added some tambourine and sticks.

Q. Pretty much all guitars were recorded by Martin Quinn – how did you manage that since he was also engineering the record?

A. We recorded the acoustics fairly flat. Martin knew his guitar and just sat himself in front of a stereo pair and I sat in the control room and ran the daw playing engineer. Drop in's were minimal and I think we did a couple of takes and combined them. I just guided the levels and gave encouragement.

Q. For vocals with the Celtic Tenors there was something very particular you were after but their schedule of availability was tight. How did you work it?

A. The schedule was tight. I wish we'd had a few more days, but the boys were well rehearsed and well prepared. We put them in the studio together and did most of it live occasionally doing them one by one for their solo parts.

Q. What were you looking for in the vocal performances?

A. I wanted to try to tone down the classical aspects of their performance and guide them into more of a pop approach so most of our time was spent discussing phrasing. I wanted a more relaxed less dramatic approach to the vocals. I wanted them to concentrate on the lyric rather than the melody.

Q. Your track record is Pop/Rock. How was it working with classically-oriented singers?

A. It was quite an experience working with vocalists who had notated their parts so that changing harmonies around was very easy. Otherwise I didn't feel it was any different really, especially since as i have said before I was trying to make more of a pop record.

Q. The string arrangements were worked on after you got back to Melbourne but was still an international effort between multiple people. How did it work?

A. Most of the string arrangements were fleshed out by myself and Rob Sedke. Daryl did two charts and Martin did one. Midi examples were sent to me in Australia for discussion and changes, The charts were then transcribed from the scratch midi examples into Sibelius. I had Martin proof read Daryl's charts to make sure they would translate correctly for the orchestra in terms of dynamic markings and cues and in Australia we enlisted Brett Rosenberg to do the same for our charts. 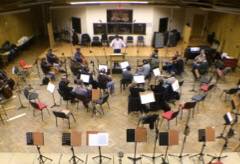 Q. You used the studio link with MPC Productions to hire the Prague FILM Harmonic orchestra to record the strings on the album. How did that process work for you? Were you happy with the results?

A. MPC was suggested to me by Martin and it went off without a hitch. Mark stayed in touch with me and liaised with the Prague FILM Harmonic and the orchestra was amazing. Extremely well recorded and very well performed. I couldn't have been happier with the outcome.

Q. And you even met a Leprechaun in Dublin before you left?

A. To be sure to be sure. A great experience. Though I never could find his bucket of gold.

Q. A longtime collaborator, Dave Way, mixed the album at the Waystation in Los Angeles, California. Can you tell us how that process was. The album had travelled a lot of miles around the world before it got back to there!

A. Dave Way has mixed a lot of records for me. Once we were done I sent the tracks to him and he did a set of pre mixes. Then I joined him in Los Angeles and we polished them up. All the mixing was done in the box and that made this process very easy. Had we worked analogue I am not sure we could have done it like this. This has truly been an international venture, Ireland, Prague, Melbourne and Los Angeles. My arms are tired!

Q. When will we hear the end product and where?

A. The album is due for release in Australia in September, I'm not really sure what is happening in the rest of the world but I feel the record is good enough to see it released in multiple territories. The record is on the Decca label, a Universal subsidiary, so we are hopeful.

Q. Any projects your working on this year we should keep an eye out for?

A. I am going to be doing a pop record with a Thai artist named Tor in the near future and then going to Los Angeles to work with Graham Russell of Air Supply on a project he has started called East of Eden. Hopefully you'll hear from both of these on your side of the world!

To read more or connect with Charles visit charlesfisherproducer.com . Also check out the Celtic Tenors at www.celtic-tenors.com

The album 'Timeless' will be released in summer 2015 and the Celtic Tenors will be touring extensively in support in the Australia region.

At a time where music business models and the industry as a whole is in a state of flux and change, it is more important than ever to find ways to monetise your music. Allowing your music to be part of a TV show, an advertisement, a movie or a radio program has become an important part of musician income. 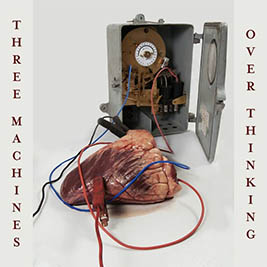 Sean Woods's latest release as 'Three Machines' was recorded using a laptop and 1 microphone in Australia, contributed to by musicians in Spain, Australia and Ireland and finally edited, mixed and mastered in JAM Studios Ireland. We talked to Sean about the project.